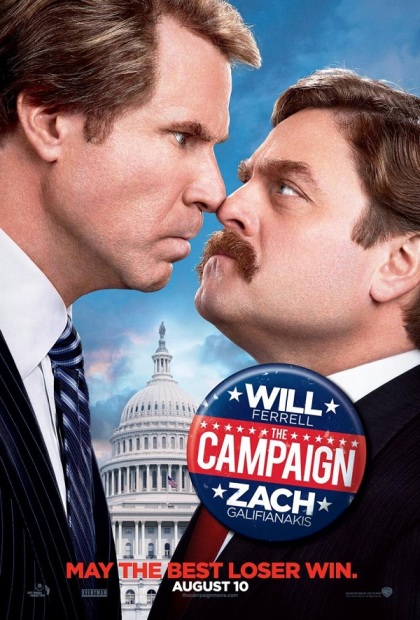 (This is the best line in the movie by far. You’ll understand why in the film.)

I will say that this was the funniest movie of the entire summer. That being said there are a few things that make this film slightly under the bar of “PERFECT COMEDY”. I would recommend you go out and watch this IMMEDIATELY because I promise you will laugh your ass off till you are crying and falling off your seat in the movie theater.

Did you know that this movie was directed by Jay Roach? That is the same guy who made movies such as The Austin Powers Trilogy, Meet The Parents Trilogy, and Dinner for Schmucks? He was also an executive producer for such movies as Borat, 50 First Dates, The Hitchhiker’s Guide to the Galaxy, Charlie Bartlett, and Bruno! Point is, this guy has gotten around. I can honestly say that this movie is nothing short of genius. I will explain why after I reveal the plot.

Plot: (I don’t want to give away too much here so I will just summarize it) The film is about Cam Brady (Will Ferrell) being a big time congressman and he is running for his 5th campaign unopposed because there is no one that can really stand up against him. However, a local man named Marty Huggins (Zach Galifianakis) decides to run against him (for reasons why I cannot explain because it would be a massive spoiler) and gives Cam Brady a run for his money. During the movie, Marty loses himself and becomes corrupt and Cam becomes more and more desperate to win the election by using every dirty trick he knows to win. The movie ends in a good way and I can say that the two of them end up being friends.

If you are wondering why I didn’t include Talladega Nights: The Ballad of Ricky Bobby, or Blades of Glory, the answer is simple: they get 6th and 7th place. But not in that order. Blades of Glory was better than Ricky Bobby. Anyways I will return to the main points of The Campaign now.

So the really great points of The Campaign are the comedy. It never stops being funny until the very end. And when I mean the end, I mean like the last 15-20 minutes. That is the only problem with this film. The last 20 minutes just kind of stop with the comedy. When I was watching this movie, the end of it just turned into a serious movie instead of being a comedic movie. That is kind of disappointing considering that Will Ferrell and Zach Galifianakis are at the top of their games with this film. I wish that it was funny all the way throughout. But eh… it is a minor complaint because the comedy is really spot on. From the moment the movie starts we are given a quote about mud wrestling and how it has to do with politics. We then experience 80 more minutes of slap ridden comedy… Wait wait hold up hold up..

Ok so I lied. I have one more complaint: The length of the movie. From the beginning to the end I would not want this movie to end; honestly I could tell that when the movie was over it was way too short. I kinda sat there thinking that this movie should be even longer than what it was. Maybe its because I was used to watching THE DARK KNIGHT RISES for 3 times and was ok with movies being that long. Anyways, I thought that there could have been atleast another 20 minutes of film in this movie. Perhaps when this movie comes out on DVD, the deleted scenes will make up about 20 minutes of lost footage. I am hoping there will be atleast that much because this movie deserved to be longer. I don’t say that often. Wanting a movie to be longer is something I really don’t say often enough because there are some that deserve to be shorter because of how messed up or bad it is.

Other than that there is not much else for me to say. This movie is hysterical. No it’s hillarious… NO! It’s so unbelieveably funny that nothing can describe how comedically funny this movie really is. I want to watch this again and I recommend that you do the same and enjoy watching this movie.