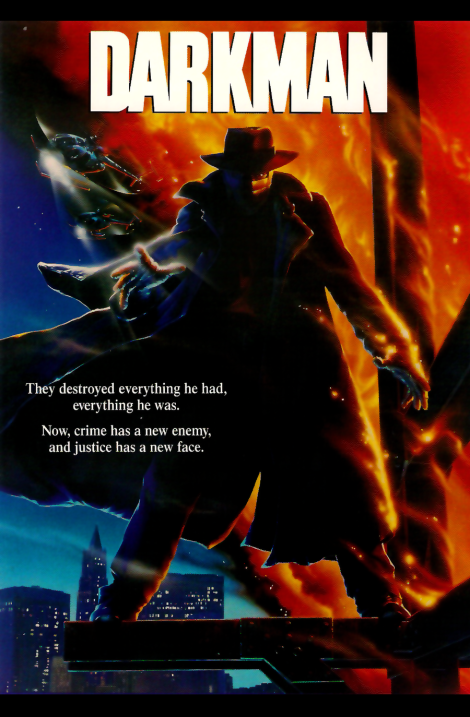 There is a reason why this movie is rated R. It’s because R, in this case, stands for RANDOMNESS!

This is not Liam Neeson’s best work and nor is it Sam Raimi’s best work. Did you know that this movie was intended to be a mix of Batman and The Shadow? If this is what came out of it then I have to say that they fucked this up big time.

I have got to say first off that there is a following of this movie. There are people out there that just adore this movie so much and I really do not understand why. I did not like this movie. At all. So don’t consider me part of that pact of followers or anything.

The plot is very confusing to me… Wait wait hold on! I really just want to say before I start that the whole movie is one big pile of ridiculousness. There are scenes that do not make sense and others that are just plain stupid and retarded. Uggh… I really think that this movie can be summarized into one word: BALONEY!

Plot: There is this scientist (Liam Neeson) who is on the verge of creating a new way for people to heal their damaged or broken skin. His girlfriend works at this … place … (I don’t remember what she does) and discovers that her boss is doing illegal dealings in order to create 1000s of new jobs. Her boss then decides to try and destroy the evidence against him by hiring some thug and his band of minions. The hired goons then go to where Liam Neeson is working and wreck the place up. The main bad guy of the group then just puts Liam Neeson into the vat of boiling chemicals and then let the entire complex blow up. Liam Neeson survives however he is horribly disfigured in the process and looks something like Freddy Krueger. Anyways, Liam then finds an abandoned complex and uses it to try and rebuild his scientific work and allow himself to try and fix his skin damage that has happened to him. However the result is a very life like mask that only survives for up to 99 minutes, and then boils and disintegrates. So Liam decides to infiltrate the hired goons and become them over time and destroy them from the inside out. The plan works and Liam then finds out that his girlfriend’s boss was the guy who wanted him dead because of something. (I don’t know ok! The plot is VERY confusing!!) Liam kills the boss and then he disappears claiming that he can be anyone. He is “Darkman“.

Ok so beside the confusing plot there is some other things I want to point out. The main thing that just bothered me from the get go is how corny and messed up this movie is. I cannot explain the level of craziness that goes on here. You can tell that this REALLY is a 90’s movie. Not that there is anything bad with 90’s movies but … in this case it is a problem. The dialogue is out of place most of the time and makes some of the characters just look dumb. There is a scene where this completely proves my point. At the end of the film, Liam Neeson’s girlfriend states that they can still be together because Liam will eventually fix his face. Wow. Really? How shallow can you get? For most of the movie Liam is trying to tell his girlfriend about his condition and he is afraid of what she will think of him. But when she finds out, she just goes along with the prospect of “Oh you’ll fix it right? … Right? … Right??”. Wow. That is some messed up story dialogue if I ever heard any.

There is also another part where we discover that the main bad guy for hire likes to cut off people’s fingers and keep them as a collection. WHAT??? Man this makes no sense at all. There are even some points where his buddies ask him about it and all he can say is that he likes fingers… ok…. uggh… anyways..

Ok there is one more scene that I HAVE to talk about! In the VERY beginning of the film we see the hired bad guys and some other guys trying to do a deal and it goes wrong (obviously). Then everyone brings out their guns and just starts shooting each other. Then.. out of nowhere… something so insane happens that I cannot believe that it happened… One of the guys… takes off his leg… and uses it as a machine gun and kills people with it. WOW. How crazy and awesome is that at the same time?!?!? The other thing to note is that this scene has NOTHING …  I repeat NOTHING to do with the movie whatsoever. I felt that this scene was completely out of place and was just thrown in at the last second to try and make the film around 90 minutes (yeah thank god it is not that long).

You might be thinking right now that I shouldn’t be so harsh on this movie considering it was made about 20 some years ago. WELL NO! I mean this movie is NO WHERE NEAR The Dark Knight or Spider-Man 2 in terms of Superhero movies. Even though this is SLIGHTLY better than Spider-Man 3, I cannot say that it deserves a break. There were a ton of great movies in the 90’s that were not given a break! Movies like Titanic, Schindler’s List, Fargo, Silence of the Lambs, The Matrix, Pulp Fiction, and Toy Story all came out in the 90’s and they got it right on the first try! Why should Darkman get any breaks? Just because it was made by Sam Raimi, who would eventually make Spider-Man 2 (and Spider-Man 1 … that one was pretty good) doesn’t mean that any of his other films wont suck. In this case DARKMAN REALLY BLOWS!

Other than that I can go on and on and on about why this movie is just a big flopping mess but really there is no reason why I should! The reason why is because every problem that I have with this movie is just too random for words! The dialogue is messed up, a handful of scenes make NO SENSE whatsoever, the characters are really stiff sometimes and like a blank slate, and again, there is just SO MUCH RANDOMNESS THAT IT CONFUSES THE HELL OUT OF YOU!!!

I do not recommend that anyone watch this movie. I felt that I wasted my life watching it and it is just as confusing to me as Blade Runner was. I don’t recommend watching that movie either. Just skip this even though the poster art will catch your eye. Just move on and DO NOT watch this movie!

P.S. – Bruce Campbell shows up in the movie for about 5-10 seconds. I enjoy easter eggs!