Is it any better than Shivering Isles? No. But that shouldn’t stop you from buying this DLC add on because it really is AWESOME!

Just to give you a head’s up I only had enough time to play it through as the vampires because I think being normal is boring. I have heard that playing this DLC on either side is exactly the same. I cannot confirm that it is unless I play it So I will give you the basic point of the plot right now.

Plot: The game starts out with you just minding your own business when all of a sudden vampires come out and start attacking you. The Dawnguard (a group of people who are devoted to destroying vampires all across Skyrim) ask you to come join them in their stronghold in order to better protect yourself against vampires. When you travel to their stronghold you are ordered to go to this specific cave and discover what they want within. When you travel to the cave you notice there is an ancient underground chamber that is keeping a woman trapped inside of it. She is a vampire and has been imprisoned for hundreds of years. She is also carrying an Elder Scroll with her and she does not know what it is for. She then orders you to take her to her father’s castle (which is full of vampires). When you arrive at the castle, the girl’s father, Lord Harkon gives you a choice. Either side with the vampires and become a vampire lord, OR, choose the Dawnguard and never return to this castle again (I chose the vampire option. Who wouldn’t?). Which ever side you choose, you are sent on a ton of different quests that involve going to the underworld where souls imprisoned by soul gems are sent, killing either vampires or dawnguard in order to obtain Elder Scrolls (they are important for the vampires because they want to use the Elder Scrolls to block out the sun forever). Either way you go, you destroy Lord Harkon and end this evil prophecy of blocking out the sun. YAY! Skyrim loves you and that’s it. I will say however that giving Harkon the bow is NOT a good idea. With that bow he pretty much just straight up kills your ass all the damn time and loves doing it too. Also it is harder to destroy him and you can only hurt him when his blood shield comes down. So don’t think that giving him the bow is a wise decision because honestly it is not.

What I can say that I like about the end of the DLC is the ability to take out the FREAKING SUN! WOO!!! The only problem is that it only lasts 24 hours of Skyrim time and it can only be done using Ariel’s bow and elven arrows dipped in your vampire companion’s blood. Hmm… elven arrows huh? I never really found that many when I was just playing the regular version of Skyrim to be honest. HOW CAN YOU EXPECT ME TO FIND MORE THEN??? Why not use like freaking iron or steel arrows! I got PLENTY of them! Arhhgh whatever!

I will say though that it is about damn time we got some horse mounted combat! The only problem is that … I never really got a chance to use it. Most of the characters I just wanted to murder completely ran away from me and I could not re-find them whilst on my horse and they just got away really quick. I tried doing it again whilst on the horse and I just found it so much easier just to get off of the horse. Isn’t that a shame? I mean it took you long enough to figure out that we wanted mounted combat and …. it’s just easier to use when you’re not on the horse. WOW. Thanks for crushing my hopes!

Here’s another thing. Why am I so weak when I am a Werewolf/Vampire Lord? This problem was not fixed within the main game and in here … there is no change. When I became a Vampire Lord for the first time I was excited when there was an exclusive skill tree perk that was only for me. I was nervous because my character was leveled to the max on level 81 and I could not gain any more levels. Don’t worry though because the way you gain perks is by killing the hell out of people! YEAAAHH!! That’s how I want to be rewarded! Killing and raping the villagers seems like a great way to gain my power to new heights and slay the innocent with their blood being drained from my vicious fangs! MWAHHAHAHAAA!!! But this is all for none because … when you are a Vampire Lord your ass gets kicked… A LOT. I am not kidding around here. The only way I was able to stay alive is because I had a ton of enchanted armor on and was able to keep the effects on even though I was now some kind of man-bat creature. Now you’re probably thinking… How are you so weak? Well I will explain below.

Look at these two pictures: 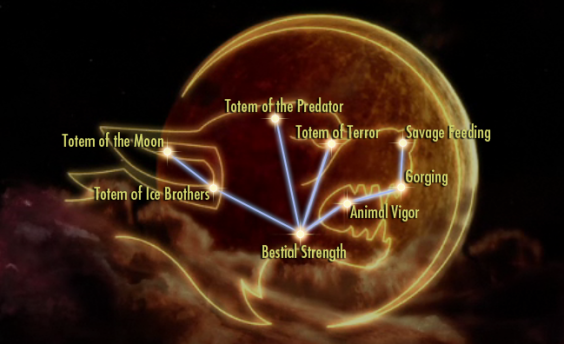 You would think that with these skills having cool names there would be no way that they would hinder your progress. And you’re right they don’t! I was just inserting those pictures just to show you what they would look like for the Werewolf/Vampire Lord Skill Trees. Ok now onto the problem at hand!

The biggest and most frustrating problem is the fact that it takes FOREVER to change into the Vampire Lord and then another FOREVER to change back into your specific character. This is infuriating because by the time you become what you want to become … your health is down so far that your just one whack away from being a dead corpse. It’s just really unfair that you have to endure a long and painful time of waiting in order to become a creature of the night. I will say though that being a Vampire Lord has its advantage because you can transform whenever you damn well please. Being a Werewolf is cool and all but your ability to remain as a beast only lasts longer when you kill more and more people. Damn. The Werewolf combat issue is that while you do transform faster, it doesn’t matter becuase your default attacks SUCK! I kept trying and trying to whack away people when I was a Werewolf but I kept getting blown away by arrows and swords and shit. Uggh… Why did they not fix this?? WHY?? We get crappy horse combat but we don’t get the Werewolf combat fixed?!?! COME ON!

One other problem with the combat is the fact that when you are a Vampire Lord, you have two ways to attack: Magic and Melee. When you are in magic mode you can only use your vampire powers (the default you get are “Raise Dead” in one hand and “Drain Health” in the other hand). This is fine but the problem is that these magic attacks do not do much. Really. I kept using Drain Health all the time and it took many many minutes just to defeat a simple zombie. And those guys are easy to kill!! Raise Dead really does not do much as well either. You can summon some really really really low level people to your aid and they get their asses kicked after a little bit. Don’t bother with Raise Dead because it is just a big waste of time. I will say that there was an awesome power I got which was “Vampiric Grip”. This is similar to Darth Vader’s force choke but this time it’s personal baby! I love raising victims off of the ground and chucking them miles away just to see their spines slam into a brick wall. The only problem with this power is that it drains your magic very quickly. So use it well my friends. Use it well. The melee attacks are just ok. There are two claw attacks (one for each hand) and then there is a vampire bite you can perform but I have not been able to figure out how to pull it off. I would just stick to magic even though it will take a little bit to get the Vampiric Grip power.

Beyond that there are a number of bugs that show up from time to time within the DLC that would just take too long to explain on this page. Just trust me that there is some and that you should be careful.

WAIT WAIT WAIT!! I forgot one more thing about being a Vampire. When you are a Vampire in Skyrim and you do not feed, the ability to regenerate stamina and magic goes down the drain. The good thing is that this only happens if you are in the sun. So be warry that this will hinder your progress in combat if you are outside in the sun.

That’s all I have to say about this DLC for now. I must say that it is a nice addition to an amazing game, but there are some features that just need more time and have to get the bugs out. Hopefully soon they will release a patch… or two that will fix the bugs and combat so that people won’t get killed all the damn time.

Here is the trailer for the game: